Advertisement
Back to overview
Home Subsea UK: Saab Seaeye to Showcase its Products at Oceanology International

UK: Saab Seaeye to Showcase its Products at Oceanology International

Saab Seaeye announces that it will showcase its four key underwater vehicles at Oceanology International including the new double-hulled Sabertooth AUV/ROV.

The new double-hulled version of the Sabertooth offers twice the operational duration of the single-hulled Sabertooth launched last year.

The unique Sabertooth concept combines the technologies of both AUV and ROV into a single unified resource.

The result is a vehicle with the range and manoeuvrability of an AUV and the tooling capability of a light-work ROV.

With a typical duration of more than 14 hours and depth rated option to 3000 metres, it can embark on either long range programmable missions or under operator control around set targets, with obstacle avoidance and precise manoeuvrability, including working down deep tunnels or inside complex structures where its 360 degree manoeuvrability allows it to orientate into any position ? even directly up or down.

And in places where access is seasonally restricted, it can remain underwater for a year at an isolated location ready to be deployed as needed. Tooling packs can be stored at its docking station; batteries can be re-charged, data and video downloaded and fresh instructions uploaded.

In an addition to the successful Panther work ROV range, the Panther XT Plus sees a breakthrough in power management that has created a vehicle with 50 per cent more power.

Fitted with ten powerful thrusters it can swim 30 per cent faster than any other electric work ROV in its class.

And this unrivalled thruster power means that the Panther XT Plus can maintain position whilst working in strong currents greater than 4 knots.

For an operator, this exceptional number of thrusters also offers a reassuringly high level of redundancy.

The significantly increased payload, along with a re-designed frame, offers more heavy-duty power and space for fitting a greater range of tools and sensors, including industry standard seven function position feedback manipulators.

Having the work class capability of a small hydraulic work ROV, the Panther XT Plus, offers a considerably lower cost of ownership, including a need for a quarter less deck space than an equivalent hydraulic vehicle and fewer crew.

A compact version of the successful Cougar range has been created to minimise the effect of current, making it an ideal vehicle for operation in high currents and shallow waters.

The result is an ROV with a reduced frame size, buoyancy and weight. A thinner 17mm tether also minimises drag. Overall, the compact design has the highest thrust to weight ratio in its class.

The Cougar XT’s unrivalled power and manoeuvrability comes from six thrusters: four vectored horizontal thrusters and two vertical thrusters. Each has velocity feedback for precise control in all directions and is interfaced to a fast-acting control system and solid-state gyro for enhanced azimuth stability.

With over 260 Falcon ROVs in use around the globe, the Falcon’s success has come from being small enough to manhandle into the water, yet powerful enough to hold steady in strong cross currents and operate tooling of all kinds.

Its trusted design is packed with technological innovations such as intelligent ‘plug-and-go’ electronics for rapid role-change during operations. This means that up to 128 different devices can be fitted, including extra cameras, lights, tracking system, manipulator and sonar, plus the option of adding special tooling on a removable skid.

For survey work, the Falcon has the advantage of a low electrical and acoustic noise signature that allows for optimum survey sensor data.

Its unrivalled manoeuvrability comes from five brushless DC thrusters with velocity feedback for precise and rapid control in all directions. 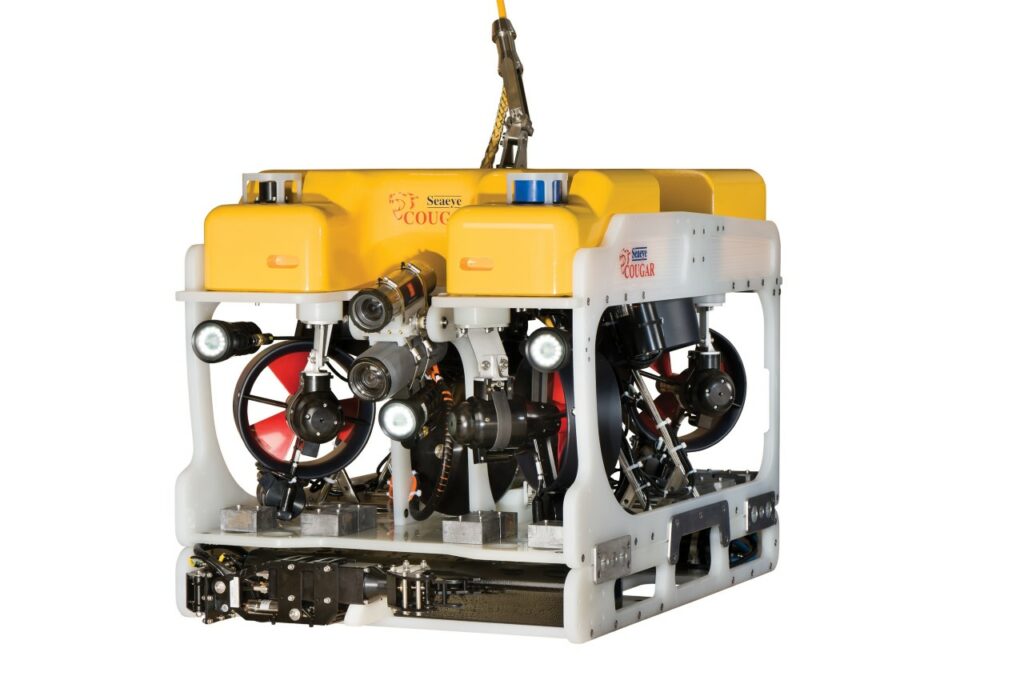