Scheduled for delivery in 2021, the newbuild is said to be the world’s first full-size, fully electric tugboat.

“We are very excited to make a start on the construction of this innovative vessel. We are also very proud to be maintaining our schedule during this challenging time when the coronavirus pandemic continues around the world,” Joris van Tienen, general director of Damen Song Cam Shipyard, said.

In keeping with tradition, the ceremony included welding coins to the keel. On this occasion, it was decided to weld two New Zealand 20 cent-pieces – thereby marking the year 2020.

The RSD-E Tug 2513 is the world’s first fully electric tug with 70 tonnes bollard pull, according to Damen.

It is expected to make an important contribution towards meeting Ports of Auckland’s goal of achieving a zero-emission operation by 2040.

With 80 per cent of electricity in the country already cleanly generated, the tug will complete a green energy cycle in the ports.

The RSD-E Tug 2513 is a fully electric version of Damen’s standard platform, the next-generation RSD Tug 2513. As explained, this vessel – and the others within Damen’s next-generation series – has been designed with a focus on safety, sustainability, reliability and efficiency.

The tug has high levels of redundancy in its power systems. The electrical system has built-in redundancy, with the batteries arranged in strings — if one battery in a string fails, the others simply carry on the work.

What is more, the tug also has two 1000kW generator sets. They provide enough power for the tug to operate at 40 tonnes bollard pull in the event of an electrical system failure or if the vessel needs to operate beyond its battery capacity. In normal operation, the generators will not be used as the vessel and its battery system has been designed to meet the port’s normal operational needs.

Following a popular vote in which people were invited to select a name for the new vessel, the Ports of Auckland’s RSD-E Tug 2513 will be named Sparky. Over half of the 8,000 people who participated in the election voted for the name. 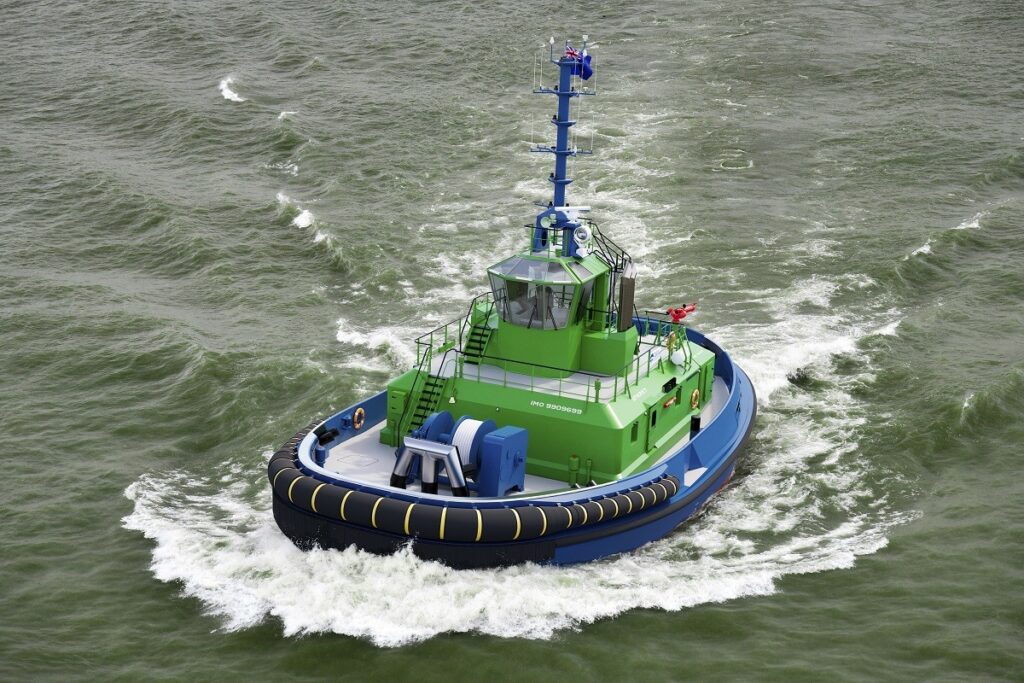