The Marine and Hydrokinetic Toolkit (MHKiT) has been updated to include data on tidal and river energy resources and various other factors to enable developers make greater use of this open-source knowledge hub.

The MHKiT is a massive, searchable, open-source knowledge hub that provides developers with the code needed to analyze how well their technology might perform in various ocean and river sites.

The updated toolkit now includes data on tidal and river energy resources, factors like turbulence and sediment that affect how technology functions underwater, analysis of extreme waves, and more.

Created in 2019 with funding from the US Department of Energy’s Water Power Technologies Office, the software is available in both Python and MATLAB, with more robust versions now released for each platform.

Just four years old, MHKiT is already a popular tool, downloaded over 4,000 times – although some of those downloads are repeat customers coming back for more, according to National Renewable Energy Laboratory (NREL).

Rebecca Fao, a researcher at NREL who helped develop MHKiT, said: “I’m really eager to help solve climate change in any way I can. Clean energy, including marine energy, has a key role to play in that, so I’m keen to see it take off. It may seem like a small piece of the puzzle, but without good quality data, the industry cannot move forward.”

NREL researchers partnered with the Pacific Northwest National Laboratory and Sandia National Laboratories to develop the first version of MHKiT, which ingests, processes, visualizes, and manages data on everything from a device’s power production and ability to withstand various mechanical loads to how much energy flows through ocean and river sites across the United States.

Before MHKiT, developers had to design their own code to analyze how well their technology performed during a wave tank or open ocean test. But code development – and validation – can be time consuming and expensive, according to NREL.

On the other hand, MHKiT’s shared software and data are not only free but standardized and quality controlled, too.

“Standardization is really key,” Fao said, “so everybody is drawing the same conclusions about the performance of their devices or designs.”

On its Python platform, MHKiT now houses data for tidal and river resources, including how much energy is available at which sites, how fast and turbulent the waters are at those sites, and what underwater obstacles – like sand and stones – might interfere with a device’s performance.

In addition, wave energy developers can now analyze extreme waves their machines might face at their chosen deployment site, increasing the likelihood the devices will endure site conditions.

On the MATLAB platform, the MHKiT team pulls in lots of data – like wave heights, current speeds, and water temperatures – gathered by a troupe of buoys managed by the Coastal Data Information Program. To better predict the weather and climates that marine energy technology might face offshore, the MHKiT team added historical wave data, too. When complete, this so-called hindcast dataset, will cover the entire United States.

Next, the toolkit’s development team plans to integrate even more data and functionality to account for hybrid energy systems – like those that pair floating wind turbines or solar panels with marine energy devices – and for smaller, niche technologies used to power the blue economy.

These include unmanned sea drones for ocean exploration or wave-powered desalination devices to produce clean drinking water in remote locations or to support disaster relief efforts. 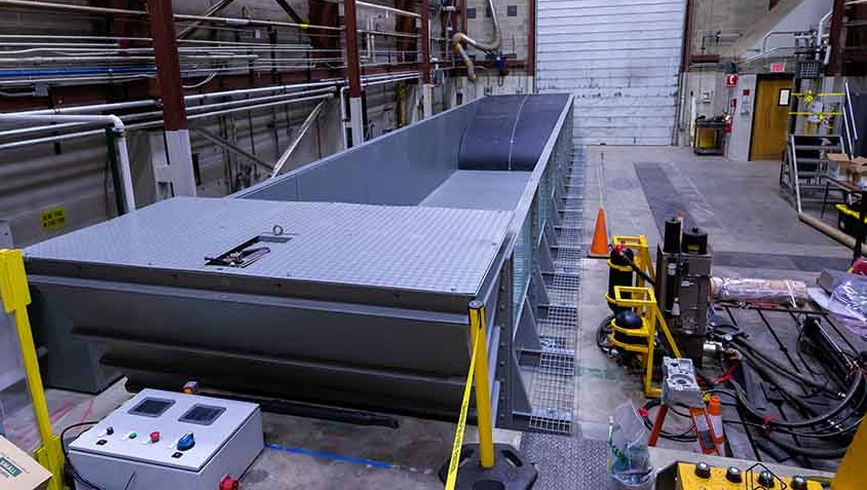