Under the deal, the company will construct two dual-fuel 7,700 TEU vessels capable of running on liquefied natural gas (LNG).

The order also includes options for the construction of two more boxships of the same size. If all the options are exercised, HJSC’s orderbook this year will rise to a total of ten ships worth about KRW 800 billion ($650 million).

To remind, in April this year, the shipbuilder revealed it developed a dual-fuel, LNG-fueled containership concept. The 7,700 TEU boxship design was approved by the British classification society Lloyd’s Register (LR).

The LNG-powered containerships will measure 272 meters in length and will be able to travel at a speed of 22 knots. The storage tank will have a capacity of 6,100 cbm.

The design incorporates a Mark Ill Flex membrane, which is often used in large-capacity fuel tanks. The Mark III membrane system, developed by French engineering company GTT, is a containment and insulation system, directly supported by the ship’s hull structure.

The project was developed in accordance with the International Code of Safety for Ships using Gases or other Low flashpoint Fuels (IGF Code) which aims to minimize the risk to ships, their crews, and the environment, given the nature of the fuels involved.

Pursuing its net-zero ambitions, on 31 March, HJ Shipbuilding secured a contract to build two 5,500 TEU boxships by receiving a $150 million contract from an unnamed European shipowner.

The boxships, said to be near-identical to vessels ordered last October, will be eco-friendly with advanced hull form and high fuel efficiency. 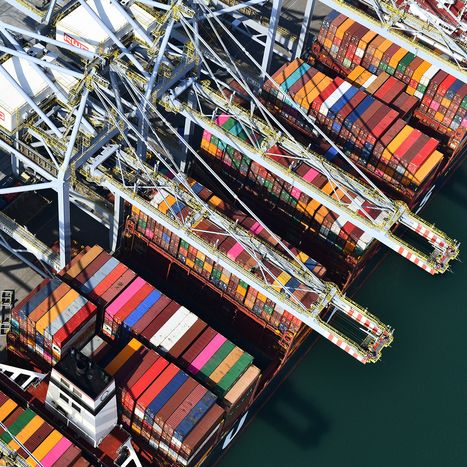